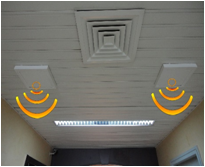 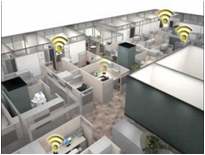 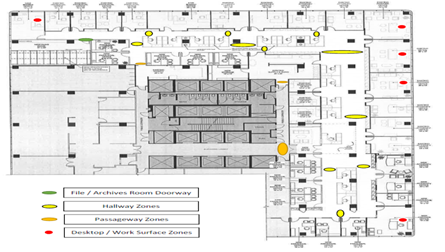 The most effective file tracking solution is to proactively track documents, files or archives to a minimal # of potential locations, so that staff can rapidly access needed files.    As can be seen from the yellow, orange and green symbols above, RFID antennas can be deployed throughout facility(s) to isolate an area that a file may be located.

RFID detection zones can be installed within offices, along hallways, at elevators/stairwell/exits or at any locations desired.

The more detection zones that are installed, the fewer locations a file may be located.  A SmartTraxx database query will display current and prior locations of files, so that the User can immediately determine the area of the facility that a file is currently located.

RFID readers are connected to the network by an Ethernet drop and power-in-proximity, or, by POE.  The cable connects to a network switch which connects to the SmartTraxx server.  Most RFID readers support up to four (4) antenna connections.  Antennas connect to readers and are powered by the reader to which attached.

Each antenna or combinations of antennas can be named as specific locations within the SmartTraxx database.  For example, a reader may have be connected to four (4) antennas, one-each in four different offices.   Each antenna is named as an office # or as the person that resides in the office.  As such, a SmartTraxx database query will display the location of the specific office that the file is located.

Any detection zones can also be designated as a security zone.  Any files that approach a RFID facility detection zone are detected and software, email, SMS, flashing lights and/or alarms can be triggered if a file is moving in an unauthorized manner. 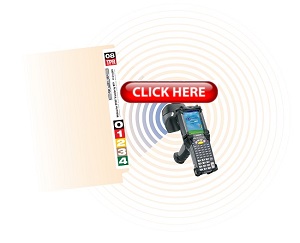 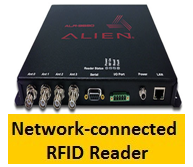